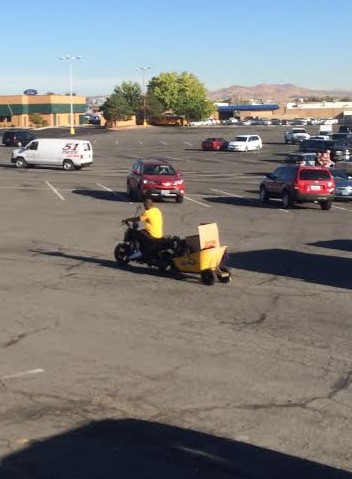 A Moped, a Wheelbarrow, and Grit

I met a man on Friday while I was walking around Reno waiting for my car that was being serviced. I was vexed with my work and I was trying to sort it out in my head while I walked. I mean I was wound up tight over some trivial issue. I probably had a scowl on my face. I was totally in my own head.

I spotted him as he rode past me on his moped pulling a two-wheeled wheelbarrow. My first thought was, “That is so cool!” I suspected he was a guy trying start his landscaping business. However, a little further down the road, I saw him pulled up next to a dumpster. At first, my opinion of him changed, but then I thought “Why?”

I went over to talk to him. I told him I liked his rig. He said it was much better than pushing a shopping cart around. However, it had gotten him in trouble with a traffic cop who had recently given him a ticket for riding his moped in a bicycle lane. He showed me a contraption that had a matching backpack that he had just found in a dumpster. He had me guess what it was, but I could not. He popped it open and it was a combined propane lamp and stove with a matching backpack. It had probably cost $50 or more when new. He said he thought he could get it going and sell it to someone. He asked me what I was doing and I told him I was walking while my car was in the shop. He immediately asked what was wrong with my car and asked if I needed some help. I explained that it was just a routine service, but thanked him for the offer. We talked about a few other things. It was still hot for the 1st of October, but supposed to turn cold in the next few days. (Do people who live on the street hear about the weather forecast? Or does it just sneak up on them?)

He asked if I was a soldier. I told him no, but I had been at one point earlier in my life. He said he guessed that, because I stopped to talk to him. He had slept in front of a recruiting center the other night. He had been awakened by a female officer who handed him a Egg McMuffin, but told him he couldn’t sleep there. He said soldiers had always been good to him. That made my eyes well up a little. Soldiers know what it is like to sleep on the floor and how to make equipment work for us in odd combinations. Soldiers also know that there, but for the grace of God, go I.

I wished him good luck and repeated that I really liked his rig. I walked away thinking about him and how blessed I am. The walk had worked for my tangled mind, but not in the way I had supposed when I set off. A hundred yards down the sidewalk, I realized I did not get his name. In most social circles that is the first thing I get when I meet someone. I was ashamed of myself, so I turned around and went back. I asked him his name. He said it was “JT” and I laughed and said, “Well, mine is TJ.” We said good-bye again with a hand shake.

I’ve got no profound truth for you here, Reader, but I know who had more grit and grace at that moment next to a dumpster in a parking lot in Reno, Nevada.

His name is JT and he rides a moped and pulls a wheelbarrow around Reno trying to make a living. It was 31° in Reno this morning.

The IMF, Foxes, and Hedgehogs

Freedom and Whiskey Go Together